There are two types of ‘dog on dog’ aggression consisting of ‘fear’ aggression, and ‘dominant’ aggression.

I shall begin with describing the subject of ‘fear’ aggression, this often originates from something lacking within the early stages of development within a dogs life. If a dog has not been taught how to be sociable with other dogs, then it can react with a fearfully aggressive display due to insecurity. The dog is purely experiencing something with which it is not comfortable, and therefore reacting to maintain a distance between the other factors and itself.

Fear aggression often occurs whilst a dog is on a lead, if it feels restricted and without the option to ‘flight‘ from the situation it will then growl or attack whatever it is afraid of. A dog in fear has very likely not been guided through socialisation skills within the company of other dogs, or possibly experienced a traumatic incidence of being attacked by another dog.

With either example, a dog will require the balanced guidance of a competent handler so it learns to trust. It is sometimes the case that a fearfully aggressive dog can become dominantly aggressive if it learns that dominance is the way to control a situation.

Dominant aggression can originate if a dog has been allowed to play boisterously with other puppies, then it has learnt how to control by using force. Although this is not always the case, as a lack of leadership can be another cause. Sometimes after a dog has been re-homed, it can become dominant and aggressive. If a new owner feels sorry for the dog, it can easily take the leadership position, and decide which dogs it growls, bites or pins to the ground. A dog that does not trust the owners can either become fearfully aggressive, or dominantly aggressive.

Working on leadership concepts will provide confidence for the dog, and lower its position in the pack. If a dog has been the victim of an attack whilst out with the owners it can lose trust in them. Therefore resulting in fear, or dominance when faced with potential threats. The owners will need to be aware of how they feel about their dog experiencing such behaviours, as they can feed into the negativity without realising it. It is very likely that a dog will experience multiple types of aggression concurrently.

For example, a dog can be fearful of some dogs, and be dominant towards others.

I am qualified in CIDBT5002 ‘Advanced Dog On Dog Aggression’. 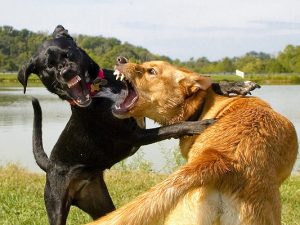