Bringing a Puppy into a Home With an Adult Dog

I would firstly advise that before bringing the puppy home, purchase some equipment in which the puppy can spend time separate from the adult dog. This can be an indoor pen that can be placed in whichever room the puppy is in, and also a crate/cage for times the puppy may be go for moments of rest.

The puppy can be put inside the pen upon bringing it home on the first occasion, owners need to remain in the same room supervising the interaction when the adult dog is present.

No talking to either dog or showing affection when putting the puppy inside the pen, allow the adult dog to decide whether it approaches the owners, or the puppy on first introduction. Proceed to introduce the puppy without excitement so the first meeting becomes associated with calmness.

The indoor pen can also be used if the puppy is troubling the adult dog, it will allow for a physical space between them and also give the adult dog freedom to move away from the puppy. Always make sure that the adult dog has the choice to spend time on its own if it needs to. Otherwise if it is made to feel uncomfortable in the company of the puppy it will likely lead to animosity.

Then the owners can observe the first time for their adult dog to meet the puppy at its own choice. The pen will prevent the puppy from becoming a nuisance to the adult dog, although they can still sniff each other.

Always be present when both puppy and adult dog are in each others company. If the puppy becomes too boisterous, the adult dog may give a warning for the puppy to cease. Adult dogs will often show teeth, or give a slight growl to discipline a puppy if they are in disagreement of its behaviour. This is perfectly normal within the dog world, adult dogs set boundaries within the pack for the younger ones to adhere to, similar to how children will tell off their younger siblings and remind them of their place in the family dynamic.

Of course we should not confuse dogs with children as this can create confusion for the dogs as the way they go about discipline is quite different from how humans do. If there is an excessive reaction from the adult dog, then there needs to be intervention from the owners. I advise that if this happens, the dogs are separated but remain within the same room so as not to create animosity.

An altercation within the dog world is often over and done quickly after, of course unless the fight is done with intent to kill.

The need to have control over the outcome of excessive reactions is paramount, otherwise the relationship between dogs within a pack can become a tense one. There should be some favour given to the adult dog whilst the puppy is in the early stages of being part of the pack, the adult dog is then less likely to feel negative towards the puppy, and the puppy will become respectful and is less prone to demand the attention.

During meal times both dogs should have their own food bowls, you can feed the adult dog first so the puppy witnesses the feeding routine you already have in place. This will encourage the learning process for the puppy, and if it approaches the adult dogs food it will probably be warned away. If the adult dog does not warn it away from the food, and the puppy persists in trying to eat from the bowl then you will need to intervene.

Teach the puppy on its own how to behave when food is being prepared, not allowing it to demand to be fed and respecting the whole mealtime ritual. The more leadership is given, the more chance of creating a balanced relationship between the two dogs.

I also encourage that children play with the adult dog first, and do not show preference towards the puppy. The adult dog will have become accustomed to having attention before the puppy was brought into the home, and will therefore be more likely to accept the puppy.

There is no such thing as jealousy in the dog world, this is a human emotion – when people see dominance they often label it as a dog behaving jealously. Sometimes this can stem from owners who feel good about their dogs being dominant over them and claiming them, owners getting unbalanced attention from dogs is not good for the dogs at all.

The indoor pen can also be used if the puppy is troubling the adult dog, it will allow for a physical space between them and also give the adult dog freedom to move away from the puppy. Always make sure that the adult dog has the choice to spend time on its own if it needs to otherwise if it is made to feel uncomfortable in the company of the puppy it will likely lead to animosity. 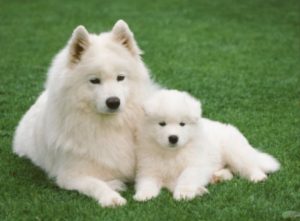