Dog aggression to people is mainly caused by fear, or lack of leadership.

Although it can also be caused by the genetics of previous generations within the breeding line, it is always paramount to obtain as much information about the history of the dog as possible. Circumstances that exacerbate, or ameliorate aggression are very dependent on the environment which the dog resides in, and the people concerned. As in all areas of change, there are always external factors which can assist, or hinder and exploring expectations with owners is a requirement.

A dogs early conditioning can have a major impact on how it perceives the world around it. The more balanced and positive experiences a dog has, along with leadership and general wellbeing the better the chance it will live a peaceful life. Although sometimes there can be incidences that are completely unexpected, for example a dog may become untrusting towards people if it is isolated by its owners due to the people becoming elderly and infirm. The dog may then lose trust in the owner as a reliable leader and protector and consequently become aggressive towards infrequent visitors.

We live in a world where people sometimes do not have the capacity to rehabilitate their dog, even with the greatest of intentions. Dogs for the most part live in peoples comfortable homes, and owners rarely often have the option of rehabilitating their aggressive dog in a specific centre set up for such issues.

Owners may see potential and speak positively, whereas the behaviourist may see a very different picture.

We need to tread carefully and be empathic when working with such cases as emotions can run high, it is our duty to discuss are possibilities in an informed manner. A dogs innate responses when fearful are usually quite clear to see if we understand body language, and how to read energy in general. A fearful dog will at times be confused with being just plain aggressive if not assessed with care. I have worked with a dog who bit at my boots upon entry to its home, as I moved it moved backwards with its head low still attacking.

Some may presume this dog was nasty and aggressive without considering it was insecure and fearful. Its first defence was to attack, as I moved forward it moved away and held its body low and refused to make eye contact. With patience the dog submitted as I calmly showed I was not there to fight, but to help it become confident and happy.

Fearful dogs mostly have a low stance, their heads are lower than their chest when triggered and they sometimes bark and growl whilst moving backwards. It is important not to underestimate their capacity to cause physical harm when in a state of fear. A dogs intelligence limitations on what we want are often misunderstood by their owners, and I find people often refer to dogs as ‘just like children’. It can be easy to forget that dogs do not learn like humans, they are much more aware of the world around them than we are as they have greater sensitivity to energies. Unless we train our dogs, how can they have an understanding of what we want from them?

Dogs learn by reward, and consequence to their actions, it is us that complicates that. Some dogs learn tasks easier than others, for example a Border Collie has great capacity to learn how to navigate an agility course, whereas it is not quite a Bulldogs choice of activity.

Solutions for fear aggression in my experiences and understanding are built on the foundations of patience, consistency and knowing the individual dog as best you can.

For example, the dog I mentioned previously who was biting at my boots relinquished its fear aggression within a short space of time whereas other dogs I have worked with took longer to rehabilitate. Leadership from the owners is paramount to increasing the dogs confidence and trust in the world.

People need to give respect and space to a fearful dog whilst the owners are in control of the situation, then the dog is under the care of a trustworthy leader who puts their safety first. Fearfully aggressive dogs often lose trust in people so we need to help them gradually find that trust again.

People have often said to me that their dog doesn’t usually approach people but it has approached me, my response is to ask how people interact with the dog. Gaining knowledge of whether the owners educate visitors to be patient with the dog and not force interaction is always one of the first things I enquire of during a consultation. If a fearful dog responds well to me and not so well to others I use this as an example of how I enter the dogs home.

The practitioners role in providing advice is one of many aspects I believe. Firstly, a practitioner needs to be professional, and then empathic to the situation as we are dealing with people and their dogs whom they often describe as their ‘fur babies’. Therefore if we are emotionless to the problems being described we are not with the client in the process as much as we could be. They may as well do an internet search on ‘dog aggression to people’ and see what the advice says.

Once I have carried out an assessment to the best of our capacity we then need to consider providing clear and easy to follow advice so the owners have the best chance of making positive changes.

I am qualified in CIDBT5003 ‘Advanced Dog On Person Aggression’. 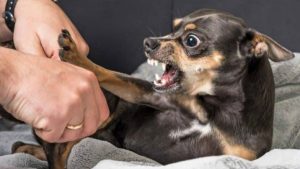